All You Need Is Kill
Hiroshi Sakurazaka

The Society of the Spectacle
Guy Debord, Donald Nicholson-Smith

A solid book explaining why some people are much more sensitive than others and how to deal with it if you are one of those people. The descriptions of hypersensitivity definitely resonate with my own experiences. I wish it went into much more detail on how to deal with it in real life. Aron tries to cover too many topics-- childhood experiences, work, relationships, etc.-- that makes the book seem a bit unfocused and the information/advice too general to be truly helpful in any practical way.
Tweet Slow-moving book, much like the first one. The mystery unravels itself very very slowly, and there's no obvious plot/no real action until the second half. The mythology of the supernatural elements continues to be revealed but sadly, no elements of classical philosophy here; this one seems more like a straight up mystery. The introduction of a second love interest and potential love triangle irks me-- not necessary at all, but I do like that the author very briefly questions whether relationships should be so difficult. It seems like it's conventional wisdom that you need to work for your relationship, but if there are just so many obstacles that seem impossible to overcome, maybe it just isn't meant to be? At this point I find the whole series rather boring but may pick up the last book just to see how everything is resolved.
Tweet Mixed feelings about this one. The premise is great-- Lucifer decides he is tired of ruling the underworld and leaves the key to Hell to the Sandman. Disappointingly, not much of interest happens after that, just a lot of chapters detailing why various groups of beings want Hell for themselves and Morpheus is mostly passive in how he handles things. I would have liked to see what was happening outside in the world with all the dead coming back and the demons freed. I did like the chapter about the schoolboy who befriends a ghost.
Tweet Pitched as "Gone with the Nuclear Wind" + Mansfield Park
Tweet My first book by Chekhov and I was pleasantly surprised. There's a lot of irony and humour in them, most of which focus on the daily interactions and occurrences in people's lives. Chekhov also uses a variety of different narrative formats (telegrams, epistolary, diary entries) to tell the stories and some of them are only a paragraph long. This made them seem more like fragments of longer tales, they felt incomplete, like little peeks into late 19th century Russian life, but I didn't really mind since I picked up this book specifically for times when I didn't want to read anything too long. But I ended up reading it all in a day anyway, ha!
Tweet Maybe I'm just really morbid but this book hooked me in right from the title and kept my attention all the way to the end. It consists of 4 short stories, all of which are about people who killed their parents. Disturbing, right? But so compelling (and hilarious!) to read. What I love best is that the author Bierce does not rely on graphic details of the murders but instead uses a more pedantic prose style, peppered with plenty of dry wit and whimsy, to hike up the horror of the stories. And these stories are absolutely horrific, grotesque, appalling... I also love the fact that the protagonists are all so matter-of-fact about their crimes, as if it was just a minor inconvenience in their lives.
Tweet Play about a woman who leaves her marriage because "women can't live in modern society as it is a male society, bound by laws for men" (paraphrase)
Tweet This book was pretty much all telling and no showing, which coloured my enjoyment of it. I don't know if this is just how light novels are written or the fault of translation-- in any case, I could have done without the narrator repeatedly telling us how perfect Youko and would rather have just seen more evidence of her flawless persona. The premise is interesting, I was intrigued by the murder recipe and I think the concept of this book is great but I wasn't into the execution. The problem is that I just didn't find Youko to be a compelling enough character to carry the story and she's basically the focal point of the whole book.
Tweet My first Hesse book and will certainly not be the last. This one is the coming of age story of Emil Sinclair who, as I understand, is heavily based on Hesse himself. I think I would have loved this book had I read it when I was younger. All of Sinclair's feelings of isolation and inner angst would have totally resonated with my teenage self. But I'm encountering this book as an adult, and I'm of two minds about it. On one hand, I do think Hesse has a point about following your own path, regardless of what others or mainstream society thinks, even if it places you on a lonely road. There's definitely something to be said about finding your own (spiritual) path regardless of other people's beliefs. On the other hand, this is the exact kind of thinking that tends to make people refuse to grow and change and adapt to the reality they live in. Yes, there's something really romantic and beautifully tragic about the idea that you can't fit in because you know something that others don't, that your alienation is the product of being special and that other people just don't understand. But I find this line of thought to be largely immature. Anyway, I don't think this was what Hesse was going for, entirely, but the book is somewhat overwrought with metaphors and symbols and mystical/supernatural elements that Hesse's message is sometimes unclear. And I kind of agree with this other review I read that said Hesse seemed to be writing to make sense of his pain (like, why would God allow war?), rather than writing about self-discovery.

That said, there's still a lot to chew on in this thin book. I especially liked the different interpretations of well-known Bible stories, and the discussions about good and evil. This is a compulsively readable Groundhog Day-style story where the protagonist Kazuki Hoshino is caught in an endless repetition of the day a beautiful and mysterious girl transfers into his class. Sounds pretty cliche but this story is surprisingly addictive with many shocking twists. Every time I thought I figured something out, the author would surprise me with a new twist, turning the Groundhog Day trope into something unexpected.

The story is definitely intriguing enough to keep your attention-- in fact, I read this in the span of a couple hours-- but upon closing the book, I felt that there weren't enough explanations for the magical/supernatural elements nor was there any real character development. The protagonist Kazuki was basically a cipher for the reader and we got no real sense of who he is. In addition, the other characters were really thinly developed, mostly relying on familiar anime/manga archetypes. I understand light novels are generally pretty thin on this kind of stuff but I was hoping for a little more than I got.
Tweet Kind of a strange adult coming-of-age type of story where a woman gets into a relationship (of sorts) with a bear. I love reading about taboo subjects so this was right up my alley. The story is not nearly as graphic or obscene as it sounds, it has somewhat of a quiet, introspective atmosphere and is mostly about a woman doing some soul-searching with the help of a furry companion. My edition came with an afterword that discusses some of the themes in the book which is worth a read.
Tweet 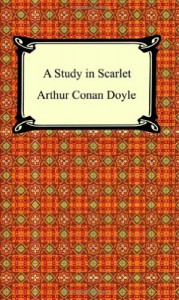 This is the first Sherlock Holmes novel, which introduces us to the great detective through the eyes of his companion Dr. John Watson. The story follows the two men from their first meeting to Watson seeing firsthand Holmes' deductive skills in action. The beginning an the end of the story are really enjoyable as we get to see Holmes working to solve the case and there's quite a bit of humour in Watson's observations of Holmes. The chapters in the middle of the book comprise of a flashback that explains the motivations of the criminal but it is neither exciting nor engaging. Overall a good book with a somewhat weird story structure, and a nice introduction to Sherlock Holmes.
Tweet

Kind of a hit or miss collection. There were a few stories that I found really dull to read, but I really enjoyed the title story, "The Fall of the House of Usher", along with "The Black Cat", and all the classic Poe tales, "The Tell-Tale Heart", "The Masque of the Red Death", etc. Poe is a master at delving into the dark psychological recesses of the human mind.

I also really liked the Dupin tales, which reminded me a lot of Sherlock Holmes-- makes sense since apparently Poe's Dupin provided the inspiration for Sir Arthur Conan Doyle's iconic detective. "Diddling" was also an interesting find, it's more of an exposition than a story but I enjoyed all the descriptions of the various cons.

Poe's only full-length novel, "Narrative of A. Gordon Pym", was a real disappointment. An adventure story and travelogue, it didn't have as much excitement as I was expecting despite having a couple sea voyages with humans braving against the forces of nature, a mutiny, cannabalism, a mysterious island and an encounter with an unknown culture. Naturally, Poe does a great job describing the despair of being lost at sea, sick and starving, and all the mental distresses of the main character in bleak times. The emotions and agonies are felt so viscerally in his writing. Much of the story, though, is bogged down by dry descriptions of the technical aspects of sea voyages, and I found myself skimming through those to get to more interesting parts.
Tweet Enjoyed this one more than the first. The plot was more straightforward and I really liked all the bits with the wizards at the Unseen University. Pratchett is an imaginative writer, and the humour is quite clever at times. I can't say I'm entirely sold on Discworld just yet but I definitely see a lot of potential.
Tweet
next »